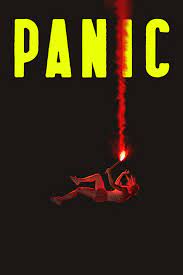 If you are like me and love to procrastinate your work by binge-watching tv shows, then look no further! Amazon’s brand new TV show Panic will captivate your attention, so your work never gets done! The brand new 2021 Amazon show Panic revolves around an amazing storyline about the small town of Carpe, Texas, and the game of Panic that haunts its residents. No one in this little town knows who created the game, when it began, who oversees it, or why it occurs in their small town. All they know is that it’s dangerous, and the graduating high school seniors are the only contestants.

Panic follows a group of high schoolers who compete in a dangerous game to try and win the grand prize of fifty thousand dollars and the chance to get out of the small town of Carpe. The game consists of various levels, such as jumping off of cliffs into water and avoiding rocks or crossing tight spaces at great heights. Everyone has their own reasons for playing. The police are after the players in hopes of stopping kids from dying, and the game is dangerous, but there’s only one rule: Don’t panic! I specifically think this show is so great because the idea behind the plot is super interesting to me and the character development is great. This show keeps me on the edge of my seat, and I’m always entertained. The show airs on Amazon Prime, and all ten episodes were released on Friday, May 28th, so you can binge the entire first season!